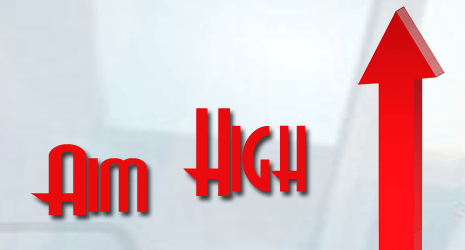 Last year I recorded an interview with Adam McMahon, from Dignam Real Estate in Thirroul, NSW.

Adam is a keen goal setter, which explains why he is so focused. In the twelve months prior to that recording, Adam produced around $730,000 in fees for his office, without the aid of a personal assistant.

Inevitably the conversation turned to ways of avoiding erratic performance. This is what Adam had to say about goals and how to reach them:

“You have ups and downs, like everyone has. To start with, you sometimes set easy goals that you think you’re going to reach quite comfortably. Then over a period of time you push yourself and take your goals higher”.

Adam said that early in his career he called another winner, Jason Hines, to ask how to achieve big goals. Jason’s advice was “Aim high”.

I rang Jason and said “I can’t seem to crack that hundred for the quarter’. Jason’s advice was to set a higher target, say $150,000 for the quarter and plan towards achieving that target”. Jason said “You will be surprised at what happens”.

Adam did what all of the winners I know do: they seek the advice of other proven winners. One phone call set Adam on the path to higher and higher achievement.

I don’t mean to diminish Adam’s performance with this statement. There was a lot more to his success than one phone call, but the advice to aim high came because Adam contacted a winner and solved a problem he was facing: how to crack a perceived production ‘barrier’.

Before receiving this advice, Adam believed $100,000 in fee production to be a barrier. By taking his target up to $150,000 in effect he IGNORED a figure that used to be a barrier and instead concentrated on achieving a figure 50 percent higher.

So in Adam’s mind, he fully intended to reach $150,000. He planned for it, and did the actions necessary to reach it. The intention and the plan are essential.

As was the goal – by planning for a higher production figure, Adam had to increase his training so that he performed competently at his raised level of actions.

Adam made a GENUINE ATTEMPT to reach the new $150,000 production target. Your intentions must be genuine, or the goal is meaningless.

Winners like Adam McMahon earn my respect. They are serious about their careers.

This is why winners like Adam McMahon are so inspiring to be around.