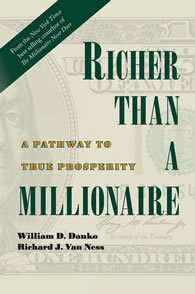 An interview of William Danko, co-author of Richer Than a Millionaire with Richard Van Ness, will be released this month on Pittard’s streaming platform iTrain®.

I like this broader focus. True success is building not only a healthy financial life, but a healthy personal life too. You can be successful and have little money, and you can have enormous wealth and still be unsuccessful.

Many people labour under the mistaken belief that most people gain their wealth through inheritance. The belief that you must be born rich is mistaken. According to the research in Richer Than a Millionaire, most wealthy people developed their wealth in one generation. This should give hope to us all!

Another key to being well-adjusted and wealthy is a happy relationship. Divorce, the authors say, can set wealth creation back by decades. On a personal level, long-term loving relationships do wonders for life enjoyment and longevity.

Fundamentally, we all feel this is so. But I wonder how many people stop to appreciate what they have and work on both their personal lives and on wealth creation. According to Richer Than a Millionaire, we can and should do both.

If you would like to improve your relationship with your significant other, read The 5 Love Languages by Gary Chapman. This interesting read might make you rethink how you and your spouse can get the most from your relationship.

And if being wealthy and well-adjusted is your goal, read Richer Than a Millionaire. These two books together are sure to give you a new perspective.

Rich and miserable? That’s not for you, is it?