Your Number One Leadership Asset

No matter whether your team is large or small, your leadership is constantly being tested. Those little chats behind your back in the team room, team members whining about you not giving them enough support, salespeople giving you lip during sales meetings – they are all tests. There are various ways to deal with these, and other, tests, but in all cases you draw on your Leadership Assets. We all have them in varying degrees.

But which of these assets is number one, your most important? Without doubt it is trustworthiness. Leaders who do not have the trust of the team go nowhere. Neither do their companies. Author, John Hamm, said this about trustworthiness: 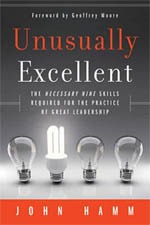 These words define great leaders: ‘word is their honour‘, ‘fair’, ‘honest‘ and ‘forthright‘.“To my mind there is absolutely nothing more important than a leader’s trustworthiness. As anachronistic as it may sound in the twenty-first century, men and women whose word is their honor, and who can be absolutely trusted to be fair, honest, and forthright, are more likely to command the respect of others than any other type of person”. Unusually Excellent: The Necessary Nine Skills Required for the Practice of Great Leadership by John Hamm.

Over the years I have interviewed, and observed, many leaders. I notice that some prefer the line of least resistance and do little to step on small breaches of their companies’ cultures. Those small breaches later turn into large challenges, often expensive challenges.

I have also noticed that many individuals do the right thing right up until the point where money is involved. Then all bets are off. They talk about trustworthiness, but when it comes to money, you can’t trust them to do the right thing.

And then I saw a leader in the Northern Territory show how it should be done. Mick Flynn had a salesperson who was well on the way to being a winner. In her first year she certainly would have produced well over $300,000 and this was fifteen years ago. Big money back then.

Mick had implemented a practice that whenever a salesperson obtained agreement from sellers to reduce the price of their listings, the salesperson got this agreement in writing, signed by the sellers. This salesperson thought it was acceptable to forge her sellers’ signatures. Her justification: she had a good relationship with the clients and they would do what she advised. If this was true, how hard would it have been to get the sellers’ signatures?

Now what would some leaders have done in this situation? They would have said, “Promise not to do it again” – after all, who wants to lose a $300,000-plus performer? The problem with this approach is twofold:

I shall forever admire Mick for the action he chose. He dismissed the person on the spot and told the team why. Now the remainder of the team knew that the leader could be counted on to do the right thing, even if it cost him money in the short term

It takes great character to dismiss a top producer when they commit an unforgivable offence. But the reward Mick reaped was that he went on to build a team of people who were trustworthy in all situations, who could be counted on to keep their promises, who were fair and forthright.

To be trustworthy is a hallmark of a fine character. Fine character is the hallmark of great leaders. Trustworthiness is your number one asset. Compromise just once and you can ruin what would otherwise have been a great reputation.

Not on your watch!